I am a Brazilian physicist working with meteorology. More specifically, I'm a doctoral researcher on satellite meteorology (remote sensing of the atmosphere) at FUNCEME (Ceara Foundation for Meteorology and Water Resources). I love to observe the skies during the day (sunset scenes, for example) and everything having to do with light and color in the atmosphere (atmospheric optics). I also love to observe the Moon, the planets and stars at night. The clouds (their shapes, textures and colors) are very interesting for me not only in the satellite images but also at the lenses of my small digital still camera SONY H7 used to capture the cloud images. Note that the observation of the skies shows the existence and the power of the true God that is revealed in the Bible.

This is my little book (written in Portuguese) on satellite meteorology and published in early 2016.

In English its title would be "Meteorological satellites: Images, applications and curiosities"

Contact the author to get (free of charge) the Portuguese pdf archive of the book below. 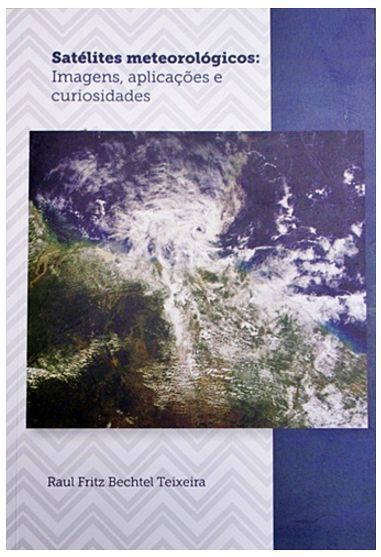 CONTACT ME.  I'd love to hear from you! Please, drop me a line if you have some comment or question about this site.  Send your message to [email protected]. Your privacy will be respected so that your information will not be shared with other parties. Do you have images of clouds, skies, celestial objects or other? Please, use the 'Guestbook' link above to put your comments and your website address. You can also post a comment under any image of my Gallery. Thanks.

Flying over the Atlantic 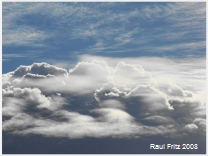 "Many of the greatest scientists of all time gave testimony of personally knowing the Creator: Johann Kepler, Isaac Newton, James Clerk Maxwell, Michael Faraday, and others". "The entire foundation of modern science was laid down by devout Christians" (Donald B. de Young, author of Weather & the Bible, 100 Questions & Answers). "The science sprang from the hurt of the Christian West. Modern science is not only compatible with Christianity, it in fact finds its origin in Christianity. The eventual rise of the experimental method owes much to the Christian matrix. Modern experimental science was rendered possible only as a result of the Christian philosophical atmosphere of the Middle Ages ("The Origin of Science" - Columbia University).

"This most beautiful system of the sun, planets, and comets, could only proceed from the counsel and dominion of an intelligent Being" (Isaac Newton).

"God gives us two books for our instruction - the book of the nature and the Bible" (Francis Bacon, author and pioneer of the scientific method).

"From a knowledge of God's work we shall know Him" (Robert Boyle, the first modern chemist, and one of the pioneers of the scientific method).

Melvin Calvin (a famous American chemist) said that the ancient Hebrew monotheistic view, and not the polytheistic Greek view, seems to be the historical foundation of the modern science.

John C. Lennox (Oxford mathematician) said in his excellent book "God's Undertaker: Has Science Buried God?" ("Por que a ciencia nao consegue enterrar Deus", in Portuguese) that the assertion that only the science can take us to the knowledge, or to the true, is not deduced from the own science. It is not a scientific assertion, but it is an assertion about the science. Therefore, it is a metascientific assertion. He also said that science can understand the impersonal principles that are operating on the universe but this does not invalidate the belief in a personal Creator (God) who designed the universe, and if we understand the mechanisms explaining a particular phenomenon, this knowledge do not exclude the existence of an agent (God) that designed the mechanism. "After all, every criminal detective who believes that an agent has committed a crime would be guilty of not using a more naturalistic explanation?" (J. P. Moreland and J. M. Reynolds).

"[God] hath compassed the waters with bounds, He hath surrounded the waters with a border, where light and darkness meet" (Job 26:10). The Bible tell us that God has inscribed a circle on the face of the planet at the boundary between light and darkness. This circle, the terminator of the earth, cannot be seen on the ground, but becomes very obvious from orbit. How could the author of Job possibly describe the planet in that way several thousand years ago apart from supernatural inspiration? (Colonel J. N. Williams, astronaut)

"Lord you have relinquished your creation to us and gave us the commission to subdue your creation. In it, you have given us all of the resources necessary to accomplish your calling." (Colonel J. N. Williams, astronaut)

"We should take care not to make the intellect our god" (Albert Einstein). "The LORD says: Don't brag about your wisdom" (Jeremiah 9:23).

"The eternal power and divinity [of God] have been made intelligible and clearly discernible in and through the things that have been made (His handiworks)" (Romans 1:20). "For every house is built by someone, but God is the builder of everything" (Hebrews 3:4).